Minikube will allow you to run a Kubernetes cluster on your development environment. This won’t exactly match the experience that you’ll have in a deployed environment, but it will be close enough to let you get your bearings.

Minikube will help when learning Kubernetes, but it won’t actually be of much use unless you have the kubectl command installed.

You’ll want to follow these instructions to install kubectl for your operating system. I’m working on macOS so I’ll be using homebrew to install.

Make sure that you’re set up properly before continuing.

Installing minikube works in a similar way to most of the installation directions for kubectl. Follow the instructions for the latest version found here. Some of the commands utilize sudo, but depending on your development environment set up you may not need them to.

Since I’m on macOS, I’ll use the corresponding instructions:

With minikube installed you’re ready to start your first cluster (this might take a little while):

The minikube start process configures your kubectl to connect to it.

The atomic unit of Kubernetes is the “pod” and a pod represents everything that is necessary for an application to run. Pods include a lot of the same information that you may have seen in a docker-compose.yml file (images, volumes, networks, etc). We won’t be creating a pod directly right now because we’re going to instead create a “deployment” that will create a pod behind the scenes. For this example, we’ll use the nginx:alpine image since it is small and exposes a port for us to view the default page.

To create a new deployment you can use the kubectl run command in this way:

In this case, we’ll call the deployment webserver and use the nginx:alpine image.

Now you can take a look at the deployment & pod using the kubectl get command:

Notice that the pod has an extra identifier as part of the name. We don’t need to manage extra info because our deployment will do it for us.

Once of the nice features of deployments is that they can keep your pods running even when something goes wrong. Let’s delete the pod that was created with the deployment and see what happens. Whenever you delete a resource like a pod, deployment, or service you’ll use the kubectl delete command.

Now if we look at the pods again we would expect to not see anything, but our deployment says otherwise.

The deployment created a replacement pod since the previous one was destroyed.

This webserver isn’t all that useful to us right now because it can’t be accessed, but that can be changed by creating a “service”. We’ll create a service for our “webserver” deployment by using the kubectl expose command:

We’re using the LoadBalancer type here, but you could have also used the NodePort, and we need to specify the port that will be exposed. Take a look at this service using kubectl get once again:

Since we’re using minikube accessing this service requires another step since we can’t get an external IP. You’ll take the exposed port (in this case 30349) and access that on the minikube IP address. You can get all of this information in a single minikube command thankfully:

Viewing the URL that the command gave you from your browser will show you the default nginx landing page.

Working with a cluster of nodes, numerous pods, and services can get a little confusing, but kubernetes can be visualized through dashboards and minikube comes with one baked right in. You can launch the dashboard using this command: 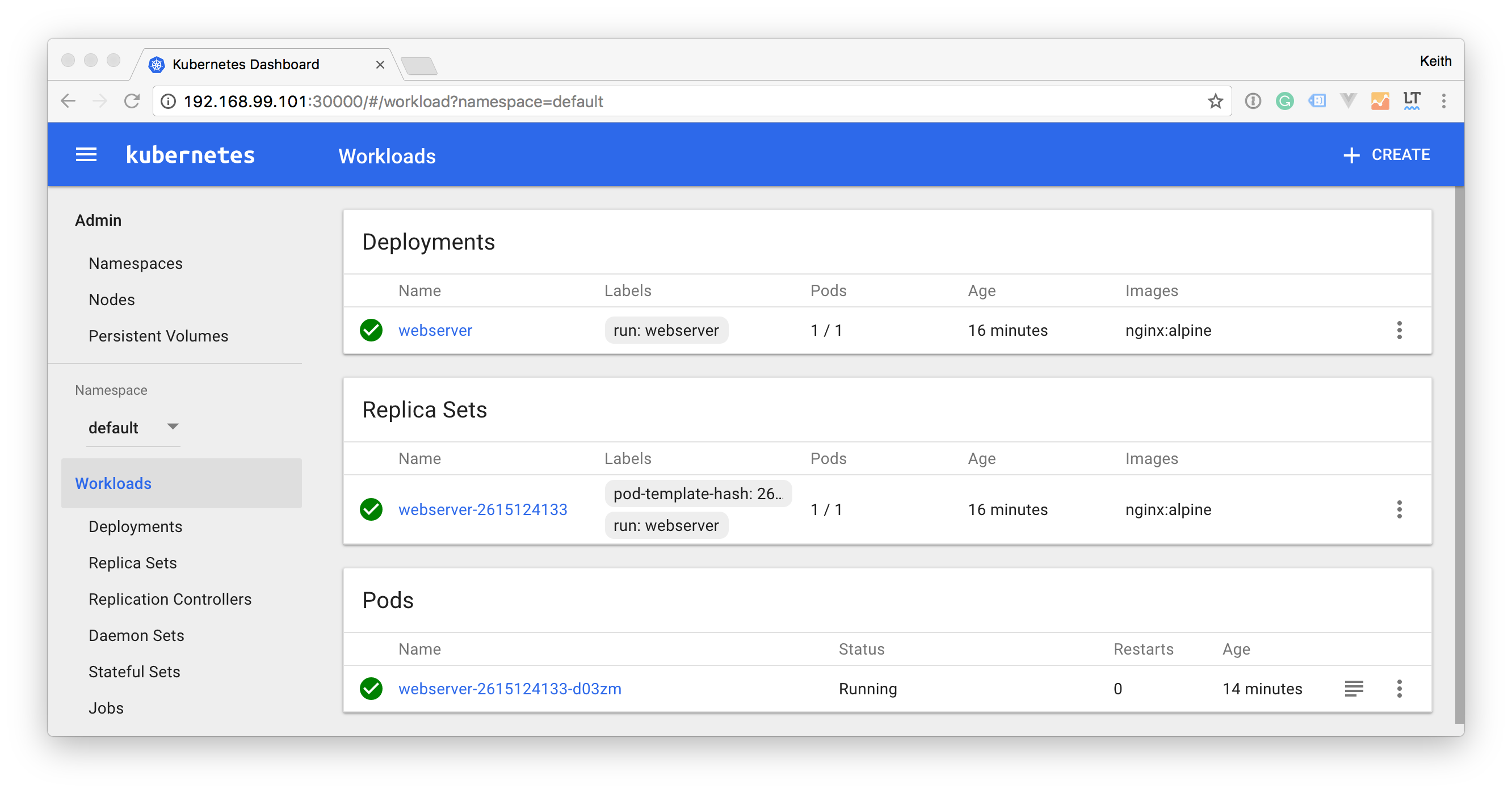 You went through quite a bit in this tutorial. You created your first Kubernetes cluster using minikube & you made a deployment that you exposed using a service. As this series continues you’ll deploy increasingly more advance setups, but this is a really good start.